Developed by independent games company Just For The Win, and the latest release of the WowPot franchise of games from Microgaming, Sherlock & Moriarty takes us back to 19th Century London, with world famous detective Sherlock, and evil mastermind “Professor James Moriarty” in the hunt for excitement, wins and juicy jackpots.

WowPot Jackpots work by starting with a “seed” amount to start the jackpot fund plus a percentage of player wager contributions. The game RTP for the Sherlock & Moriarty WowPot is 86.80% with an additional progressive jackpot contribution of 5.30% equating to a total RTP of 92.10%.

During the game, progressive tokens (the magnifying glass token/s) appear on high symbols on reels 1, 3 and 5. One of these tokens collected on the current spin can contribute to the chance of triggering a jackpot.

Trigger the WowPot Jackpot feature in Sherlock & Moriarty, and you’ll have an opportunity to land one of four potential progressive jackpot prizes. You are guaranteed to win at least one of the Jackpots when you trigger the WowPot jackpot wheel. 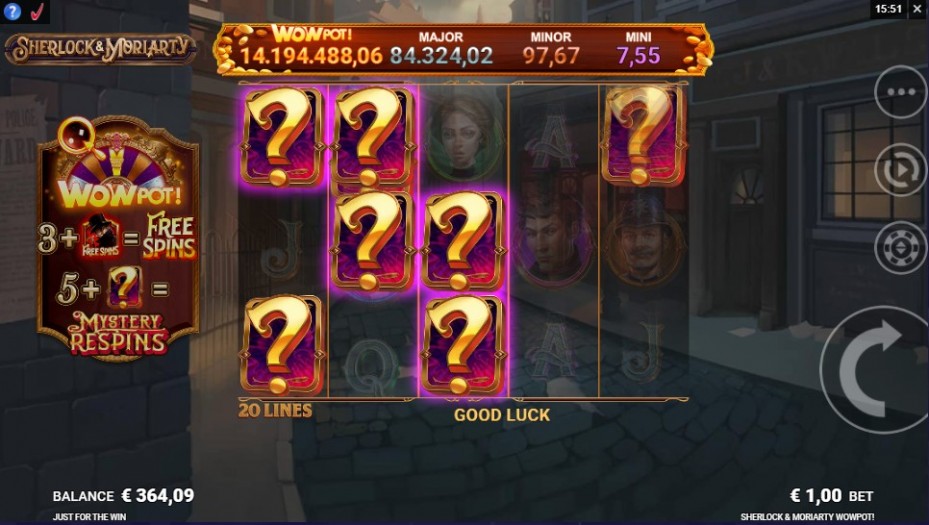 The main attraction in this game is undoubtedly the WowPot Jackpot feature. You collect magnifying glass tokens as you play, and these will only appear on premium symbols landing on the 3 middle reels in the base game. The Jackpot Wheel feature triggers randomly, but you get more tokens the higher you set the bet level.

We love the big-win possibilities with progressive jackpot games like WowPot, Mega Moolah and Major Millions, and we were really charmed by this game – it oozes top production values – with great sound effects, slick graphics and enough variety in features to make this a slot to come back to.

Sherlock & Moriarty uses the latest HTML5 technology – so it runs on any device (tablets, Macs, Pc’s, iPads, iPhones, Androids) without any installation or downloads required, and it’s great fun.

Players are hitting the progressive jackpots quite frequently (as the WowPot historical payout statistics show), and judging by all reports and player reviews slots players are loving the game too.

Online Casinos featuring Sherlock & Moriarty by Just For The Win